Last month, a Learning-to-Rank (LTR) seminar/workshop was held at RONDHUIT Co, Ltd., at which I gave an overview of the implemented neural network algorithms in the Learning-to-Rank for Lucene (LTR4L) project. More details about the event, including the slides presented by the speakers, can be found here.

You may have noticed, but the output of PRank is simply the inner product of the features of a document with the weights. 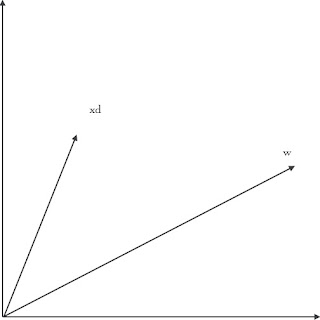 The weights and thresholds are updated in the following manner: first, obtain the output by taking the inner product of ω and x, and classify the document based on the output. If the prediction is wrong, move ω closer to x by adding N*x to ω, where N represents how wrong the prediction is (if class 1 is predicted, but the true class is 3, then N = 2). The incorrect thresholds will also be moved closer to the value of the inner product.

OAP-BPM is an algorithm which uses PRank, and the objective of the algorithm is also the same as PRank: to classify documents.
Similar to PRank, OAP-BPM makes its prediction based on the inner product of the features of a document and a weight vector. The difference between OAP-BPM and PRank is how the weight and thresholds are learned. 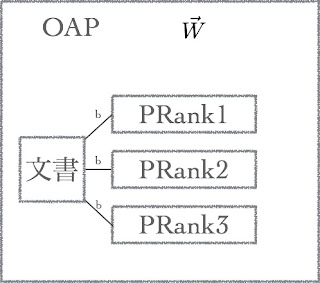 OAP-BPM is also simple and relatively easy to implement. In addition (at least, when tested on the Microsoft LETOR datasets), when comparing NDCG, it appears that OAP-BPM can learn more accurate models than PRank.

Below, I will explain some of the MLP algorithms.
MLP networks usually have one or more hidden layers, in addition to the input and output layers.
Each node has an activation function, which is a function that transforms the total input into a different output; some examples are ReLU and Sigmoid. Usually, the number of layers and the number of nodes can be freely set by the user.

When updating the weights in a neural network, backpropagation is used, but the frequency of backpropagation and the number of documents necessary in one instance are different depending on the algorithm. Also, the loss function which is being minimized by the backpropagation can also differ.

The main difference between the algorithms are:
- Structure of the network（such as number of output nodes or output activation）
- Loss function
- Frequency of update (if mini-batch is implemented, this can be changed)

NNRank is a MLP algorithm, the goal of which is to directly classify documents. The number of output nodes should be equal to the number of classes - 1, and the output activation is Sigmoid. 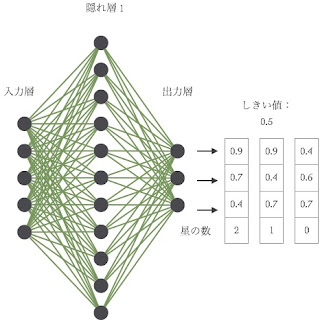 In the image above, each node has a threshold of 0.5. The number of the first node which has an output lower than the threshold is the predicted class. As this is a pointwise algorithm, weights can be updated per document.

As NNRank directly classifies a document, a relevance score (or similar such score) cannot be obtained from the network.

RankNet is a famous MLP algorithm which is also the base for other MLP algorithms. The objective of RankNet is to learn the model by minimizing a pairwise cross-entropy loss function. While learning, the algorithm tries to predict which document is more relevant, given two documents. However, the output of the network is a score, similar to a relevance score (and thus when using the model to make a prediction, only one document's features are necessary). 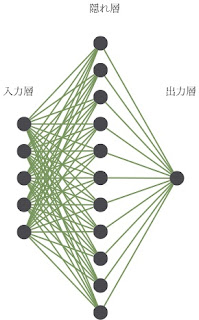 While RankNet performs relatively well, minimizing the pairwise loss does not necessarily mean the evaluation score will rise. For example, refer to the image below: 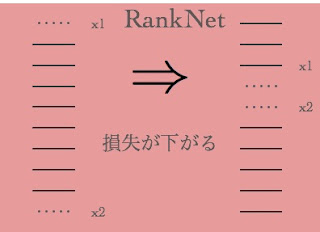 In the above image, each line represents a document returned for a particular query, and the dotted lines represent documents which are relevant to the query (other lines are not relevant to the query). In RankNet, the ranking on the right side has a lower pairwise loss, because the number of incorrect pairs (the prediction of which document is higher than the other is incorrect) is lower. However, when judging by particular evaluation metrics, such as NDCG@1 or NDCG@2, the left side scores higher. So how should this problem be solved? The following algorithm was developed to address this issue.

Type: Pairwise (However, information about a list is required during training)

In RankNet, there was the problem that evaluation score could fall even if loss is minimized. To solve this problem, the gradients were modified in the following manner (assuming the use of NDCG):

|ΔNDCG| is the change in NDCG when documents i and j are switched.
Consider the image below. In the case of NDCG@1, it would be more efficient to raise the 3rd ranked document to 1st place, rather than the 8th ranked document. Thus we want a gradient which satisfies the condition in the image below: 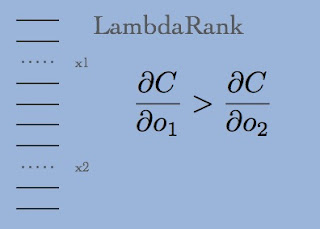 By the way, the gradient cannot be freely defined. It needs to satisfy the condition that the its integral (the loss function) exists. Please refer to the Poincaré lemma.

Popular posts from this blog 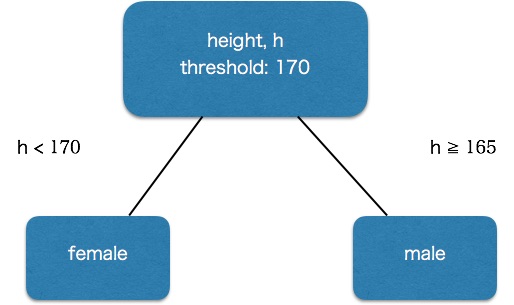 Introduction to Boosting Boosting is a type of machine learning algorithm in which a strong learner (a classifier with stron predictions) is made by adding together many weak learners (classifiers with weak predictions). The idea of strong learners and weak learners are fundamental to understanding boosting, and so I will attempt to very simply summarize them below. A weak learner is classifier which predicts with slightly higher accuracy than just randomly predicting. Generally, weak learners have a very simple structure. For example, for simplicity let us consider two categories: male and female. Let us attempt to find a classifier which can predict a person's biological sex (not gender, though correlations may or may not exist), based on the following information: Features of a person: (age, height, social security number, the number of times a dress or skirt was worn in the past five years) Obviously, none of the information above will directly tell you the biological se
Read more